Home News Special attention in fiscal policy for 2019 will be paid to increasing... 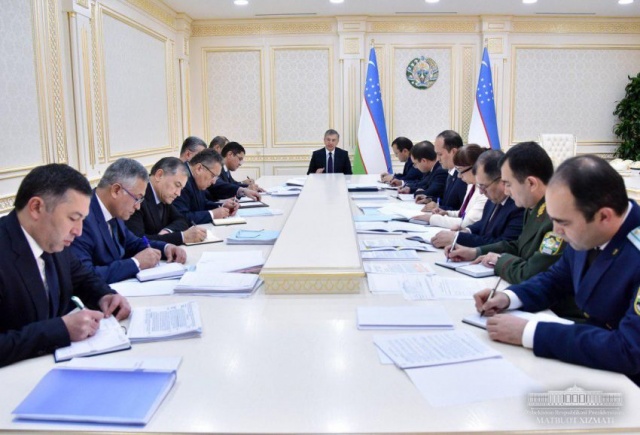 On October 30, 2018, the President of the Republic of Uzbekistan Shavkat Mirziyoyev held a meeting to discuss the expected results of the State budget execution in the current year, the main macroeconomic indicators and directions of fiscal policy for 2019.

At the meeting, it was noted that following the results of the current year, the State budget revenues are expected to amount to 74.5 trillion UZS, expenses – 78.5 trillion UZS, local budgets will have 5.5 trillion UZS or 6 times more funds than the last year.

The most important thing, along with an increase in the wages of public sector employees, pensions and benefits above the inflation rate, wages of educators, teachers, science and culture workers increased from 30 to 100 percent.

Liberalization of monetary and price policies, streamlining mutual settlements in agriculture and the growth of capital investments had a positive effect on increasing budget revenues.

There are two months left until the end of the year. Therefore, it is necessary to use all the reserves and prevent a possible budget deficit, Shavkat Mirziyoyev noted at the meeting devoted to discussing the expected results of the State budget execution this year.

At the meeting it was noted that the steady growth of budget revenues in the next year, the historical changes introduced in the tax system will become a great support for the population and business.

In particular, as a result of abolition of mandatory deductions from revenue from January 1, 2019, an additional 5.2 trillion UZS of income will remain at the disposal of enterprises.

Reduction in the maximum personal income tax rate from 22 to 12 percent, a single social payment rate from 25 to 15 percent, and the abolition of the 8 percent insurance premium will lead to an increase in population’s income by 6.5 percent.

As a result of reducing property tax rates of legal entities from 5 to 2 percent, income tax from 14 to 12 percent, a single tax payment for small business from 5 to 4 percent, 2 trillion UZS of additional funds will remain at the disposal of entrepreneurs. In general, the number of taxes and obligatory payments will be reduced from 19 to 15 types.

These breaks will make budgetary revenues a little more difficult. In this regard, at the meeting instructions were given on reducing the deficit and increasing budget revenues, in particular, carrying out systematic work on legalizing the number of employees and wages.

At the meeting, which was held by the President of the Republic of Uzbekistan Shavkat Mirziyoyev on October 30, instructions were given on submitting to the Oliy Majlis in the near future a well-designed Budget Message for 2019 and a draft of a relevant law on introducing amendments to the tax policy.

Instructions were also given on introduction of a simplified mechanism for paying value-added tax, inventory and optimization of existing benefits.

When discussing the expenditure part of Budget 2019, the President noted that expenses should be focused mainly on social and economic spheres.

We must continue the policy of raising wages, pensions and benefits from the budget not lower than the inflation rate. Main attention should be paid to social workers with relatively low wage growth rates, including raising wages of medical workers by 26.5 percent, higher education and science institutions’ workers – 1.5 times, the President said.

As noted at the meeting, it is planned to increase social expenditures by 20 percent, and the share of wages and equivalent payments in the State budget from 49 to 54 percent.

Attention was paid to implementation of the adopted state programs. It was noted that it is necessary to attract foreign funds for this purpose on favorable terms, to form and include in the Investment Program 2019 a specific list of objects to be repaired within the framework of “Obod qishloq” (“Prosperous village”) and “Obod makhalla” (“Prosperous neighborhood”) programs.

Instructions were given on targeted and effective use of budgetary funds, further strengthening control in this sphere.

Reports of responsible managers on the issues discussed at the meeting were heard.