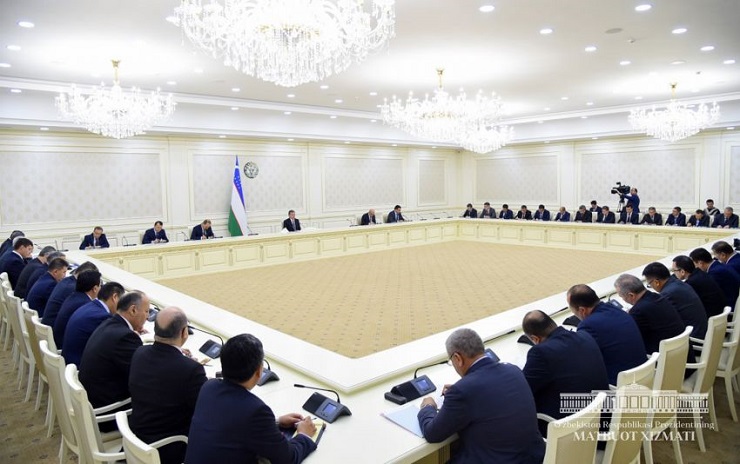 On October 24, 2018, the President of the Republic of Uzbekistan Shavkat Mirziyoyev held a meeting on the issues of further developing higher education, improving the quality of training personnel, expanding the integration of science and production.

In recent years, a number of documents aimed at bringing higher education to a new level have been adopted. Modern educational standards, a transparent system of admission to universities were introduced. This year, admission quotas have increased by 30 percent compared to the last year.

Programs on development of higher education institutions, improvement of education quality for 2017–2021, approved by the resolutions of the President, were joyfully received by professors and the general public.

In 2018, 13 new universities began to operate in the country, in particular, the Silk Road International Tourism University in Samarkand, a branch of the National University of Science and Technology MISiS (Russia) in the city of Almalyk, Bucheon University (South Korea) in Tashkent.

By the decree of the head of the state of September 25 of this year, El-yurt Umidi Fund was established under the Cabinet of Ministers. It promotes the active involvement of our compatriots abroad – scientists, specialists and experts to large-scale reforms carried out in Uzbekistan, as well as talented youth in receiving education in developed countries, advanced training in leading international institutions and foreign organizations.

This year, for the first time, a national ranking of universities was created, the educational and scientific-research process was considered based on international experience. The analysis revealed a number of problems and shortcomings.

Thus, quotas for admission to higher education institutions cover only 7–9 percent of graduates of secondary schools, academic lyceums and professional colleges. In Russia, the figure is 74, in South Korea – 96 percent.

At the meeting on the issues of further developing higher education it was noted that higher education institutions and their professors do not enjoy prestige and authority in the international scientific community. The fact that the work on attraction of internationally recognized and highly qualified scientists and teachers to the educational process has not been organized at the proper level, was criticized.

Disregard opinions of professors and teachers in appointment of rectors and vice-rectors does not ensure the high efficiency of activity of the newly appointed heads with the team.

There are no necessary conditions for development of science, integration of research into production, improvement of scientific activity effectiveness, as well as for the research of talented students.

Activities on introducing innovative methods into the educational process, ensuring linkage of curricula with production, and most importantly, improving the qualifications of teachers, are not satisfactory.

The order of studying, certification, accreditation of universities’ activities, nostrification of documents absolutely does not meet today’s requirements.

– It is regrettable that in conditions of accelerated development of the economy, the system of higher education, instead of being a “locomotive” of development, does not keep up with the times. The bitter truth is that we do not have a system that responds to structural changes in the labor market, which is capable of teaching youth and developing their entrepreneurial skills, – said the President of Uzbekistan.

In this regard, urgent tasks were identified at the meeting and relevant instructions were given.

The need for introducing simplified system of students’ admission and transition on this basis from the system of quota admission to state order and differentiated fee-contract system was noted at the meeting, which was held under the chairmanship of President Shavkat Mirziyoyev on October 24. The task was set on moving from centralized financing to self-financing and economic independence in order to increase international prestige of universities and worthy stimulation of activities of scientific-pedagogical staff.

The Head of the state noted that the main task in education is to improve the assessment system of students’ knowledge, educational programs and educational process.

Optimization process of 1 318 professional colleges operating in Uzbekistan is also an urgent problem. The Head of the state criticized the fact that specific solution to this issue has not yet been found.

In order to fully meet demand in labor market, moreover, cover youth with education is necessary taking into account the needs of the real sectors of economy of the regions, organize on the basis of the system of secondary special, professional education integrated with bachelor’s degree of higher education “high schools” – multidisciplinary educational institutions specializing in short-term training, as well as to form training system of new generation of middle-level personnel for acquiring working professions.

At the meeting on the issues of further development of higher education, the activity of Uzbekistan Council of Rectors of Higher Education Institutions was considered. The need for fundamental reformation of this structure was also noted. It was emphasized that rectors’ qualification should be assessed, with particular attention to their spiritual-enlightenment and scientific potential.

Instructions were given on developing concept for radical improvement of higher and secondary special education system for 2018-2023.

At the same time, the task was set on developing draft government resolution providing for further simplification of procedure for recognition and nostrification of diplomas of foreign universities, improvement of certification and accreditation process of higher education institutions in order to create conditions for activities of youth in the country, who have received education abroad.

Results of Uzbekistan – Russia Educational Forum were noted at the meeting held on October 24 under the chairmanship of President Shavkat Mirziyoyev.

Following this forum, 114 contracts and agreements were signed with Russian partners. In particular, it is planned to open branches of six prestigious universities of Russia and two faculties in Uzbekistan, implementation of 52 joint educational programs. Roadmaps have been developed for each agreement.

The Ministry of Higher and Secondary Special Education has been instructed to ensure implementation of tasks together with relevant ministries and agencies defined in these roadmaps. Necessity of qualitative development, approval and practical implementation of relevant legal documents for each branch, faculty and joint program was noted.

Future faculties should be gradually transformed into branches.

At the meeting, instructions were given on strengthening scientific-pedagogical potential of professors and teachers, introducing scientific-technological developments and information technologies into higher education system on the basis of signed agreements.

The President noted that it is necessary to define specific plans for careful preparation for the next forum, which will be held in Russia in 2019.