Home News Tashkent should be an example in everything 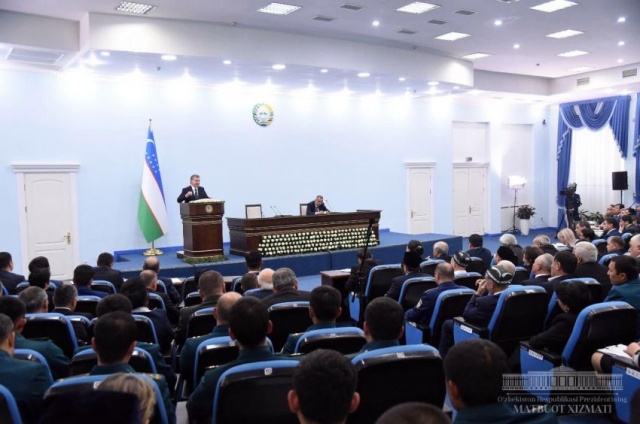 The President of the Republic of Uzbekistan Shavkat Mirziyoyev is becoming acquainted with socio-economic life of Yunusabad district in Tashkent city, prospective plans of entrepreneurs.

President Shavkat Mirziyoyev noted that Tashkent has wide economic opportunities, the capital should be an example in all spheres. He gave instructions on further increasing foreign investments, creation of new enterprises and increasing tax revenues.

Construction activities are carried out on Turkiston and Yunusobod stations, as well as laying tunnel between them.

The tunnel is built in a closed way, for this purpose, Herrenknecht tunnel boring machines were brought from Germany. This heavy machine was assembled in May-September. Specialists improved their skills in Germany for working with machines. Tubing manufacturing workshop for attaching tunnel walls has been commissioned by Kuprik Qurilish Trust.

The President inspected this technical complex and gave recommendations to responsible persons regarding appearance and infrastructure of stations.

During the construction of transport communications, it is necessary to take into account further development of the city and ensure convenience for all, the President noted.

In accordance with the decrees and resolutions of the President of Uzbekistan, large-scale activity is also being carried out in Tashkent city for developing a system of preschool education, expanding the network of kindergartens and strengthening their material and technical base.

Preschool education institution No.74 in Bogishamol makhalla of Yunusabad district this year was reconstructed and acquired a modern look. Classrooms are equipped with beautiful, interesting and developing equipment. The kindergarten received a new dining and sports hall.

Today, the kindergarten brings up 375 children.

The President got acquainted with conditions created in the kindergarten and talked with workers.

Spirituality, knowledge, health of children are in the first place for us. Therefore, the state pays great attention to preschool education and this is just the beginning. Your task is to recognize children’s special talent, to give children a good education, said Shavkat Mirziyoyev.

Information on the status of preschool education institutions in the city of Tashkent and projects for their development was provided. The Head of the state approved proposals and noted the need for building new kindergartens based on public-private partnerships, expanding the coverage of children and achieving hundred-percent result in the future.

A conversation via video conferencing was held with the leadership of Bucheon University of South Korea.

On October 26, President Shavkat Mirziyoyev became familiar with the project of this modern business center.

In accordance with the resolution of the Head of the state “On measures of creating modern business centers “Business city” in the territories of the republic” of August 2 of this year, this complex is planned to be located on a plot of 45.5 hectares in Otchopar-2 makhalla of Yunusabad district. It will consist of shopping malls, offices for business, parks, entertainment facilities, housing and other facilities.

According to preliminary calculations, the project cost amounts to $500 million, it is scheduled to be implemented in 2019-2023.

The President noted that when building a new business center, it is necessary to take into account the terrain, to use advanced international experience. He gave instructions on attracting foreign investors, experienced designers and builders to the construction.

Presentation of proposals on management of apartment buildings of Yunusabad district, developed based on the experience of the Russian city of Kazan, was also held here.

They envisage improving the maintenance of apartment building by organizing professional service companies, strengthening the material and technical base and ensuring economic sustainability.

The President noted that this system should be introduced in the district this year, each house should be covered by services of service companies and provided with benefits.

Without conducting innovative, scientific and organizational work in the complex, this sphere will lag behind the times. There will be no quality until public services are transferred to private enterprises. If there is no quality – there will be no stable receipt of payments. Improving the work in this sphere, making the calculations clear, we will change the situation and achieve people’s satisfaction, the Head of the state said.

The enterprise with a project cost of 62 million dollars was organized on the site of the former Tashkent paint and varnish factory. After the reconstruction of the factory building, the enterprise was put into operation on October 5 of the current year. Here modern equipment is installed from countries such as Germany, Switzerland, Italy, Austria, and the Netherlands. It employs almost 830 people.

The company produces about 50 thousand tons of confectionery per year. 60 types of products such as chocolate, candy, cookies, waffles are produced here.

Previously, such products were mainly imported. Confectionery products of the Amilov due to their inexpensive relative to foreign analogues price and quality quickly took a strong position in the domestic market. As a result, the import of such products into the country has decreased by forty percent. Moreover, the company intends to export products worth 10 million dollars a year.

The Head of the state gave instructions on expanding production capacity of the enterprise, increasing the number of such factories, localization of production of other types of imported products.

President Shavkat Mirziyoyev held a meeting at Uzexpocentre with participation of khokims, responsible persons and heads of sectors of the city of Tashkent and Yunusabad district, and chairmen of makhallas.

Measures for development of the economy of Yunusabad district, further improving the social infrastructure in 63 makhallas, and increasing the welfare of the population were identified.

It was noted that there is a need for development of roadmaps for each of the 38 projects planned for 2019 in the field of industry and provision of services, with specific indication of initiators and funding sources.

Instructions were given on organization of new productions on the basis of 332 unused facilities and land plots identified as a result of the inventory, increasing in budget revenues and household incomes.

Tasks have been identified for solving urgent social problems, improving the maintenance and public services of the housing stock, and preparing facilities for autum/winter season.