Home News Successful completion of the year and achievement of key macroeconomic indicators is... 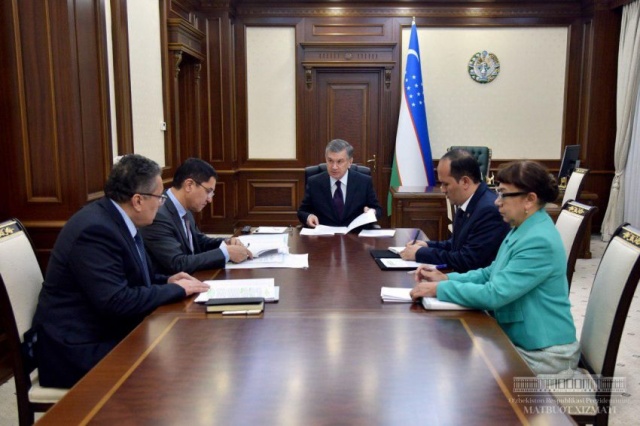 On October 10, 2018, the President of the Republic of Uzbekistan Shavkat Mirziyoyev held a meeting devoted to discussing the state of socio-economic development of the country for the first 9 months of this year, as well as expected results by the end of the year.

It was attended by the heads of the Cabinet of Ministers and relevant economic departments.

Development of financial market is an important factor in further liberalization of the economy and creation of favorable conditions for entrepreneurship.

In this regard, large-scale reforms have been implemented in the country. In particular, the Decree of President Shavkat Mirziyoyev “On priority measures for liberalizing monetary policy” of September 2, 2017 contributed to fundamental reforming the current system of currency regulation, liberalization of monetary policy, and creation of equal conditions for all business entities in foreign trade.

Implementation of measures envisaged by the decree contributes to improvement of business environment, increasing the investment potential of the country, due to which the activity of economic sectors will further intensify.

Liberalization of foreign exchange market requires increasing the liquidity of the economy and directing free funds for implementation of important investment and infrastructure projects.

In turn, it is important to develop the capital market, attract free funds of economic entities, banks and insurance companies to important projects. Implementation of new reforms in this direction will expand the possibilities for balanced financing of the State budget expenditures.

At the meeting, reports of responsible leaders on implementation of the state program “Every family is an entrepreneur” were heard.

The President of Uzbekistan gave relevant instructions on development of the capital market in the country in accordance with the Action Strategy, issuing securities for attracting free funds of economic entities, commercial banks and insurance companies for implementation of important investment projects, as well as successfully completing the current year and achieving all forecasted main macroeconomic indicators.